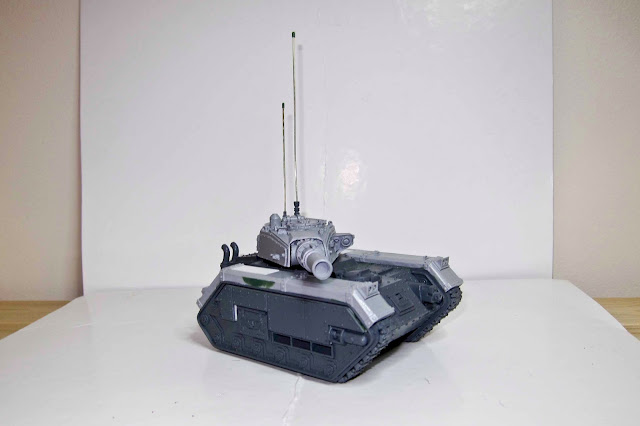 So here it is in all its glory (minus the paint job obviously). 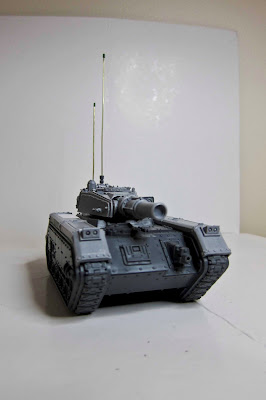 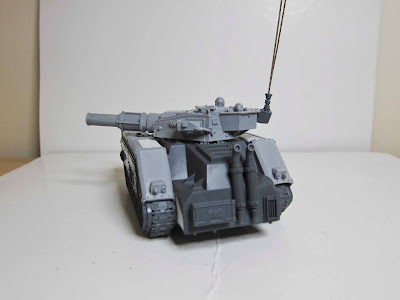 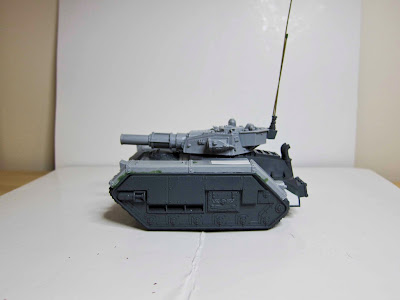 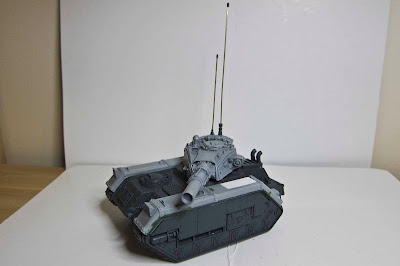 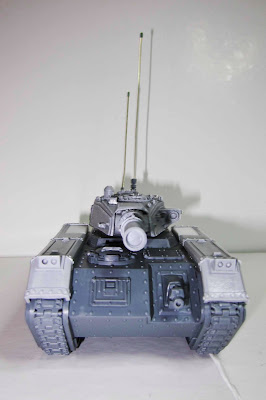 I'd planned to get it done a while back but then I went on holiday, back to work then was ill and before you know it a months gone by!

The heavy bolter is magnetised so it can be swapped out and because of this the front bottom section is fitted into place securely but removable in case I ever need to repair the back magnet (thinking ahead!).

The aerial box is also magnetised so it can be on or not, and for easier storage/breakage protection. Looking on the photos I wonder if I have over done the aerial size! But on the actual model I think they look great.

The forge world turret can swivel 360 and the main good thing about it is it can be swapped out easily for a different kind as they just drop in (I have a Vanquisher with Pask I'm doing after picking the turret up cheap off eBay). Its glued in elevation which doesn't bother me after seeing quite a few droopy Leman Russ barrels out there!

I have gone with the Chimera hatch on the front because I a) think it looks ace! b) probably wont need them on the Chimeras so win win.

I replaced the missing track sections with cut and filed plasticard and hopefully once painted it will give the impression of hatches to gain access to the tracks. I was going to put handles on but thinking about it you would probably lift from underneath so seemed fiddly and unnecessary.

I tried to keep the back interesting but not too cluttered, hopefully I have achieved that. It took a while to sand the Baneblade exhausts so they fit but I think they look well worth it.

Finally I know the side skirts were dividing opinion. I could take the point that some thought the model needed more "bulk" but they just didn't look right to me. I have spent a bit of time around and always liked tanks and it looks very unnatural to me on any tank to have the hull continuing passed the tracks. That being said once cut down they looked too flat so I added a 1.5mm section of plasticard to bring them out a bit. I really like the look but I'm aware others may disagree, but it definitely looks more tank like to me.

There we go, any criticism always welcomed as there's still time to tweak with it, but I'm rather proud and look forward to doing the next. I want two to start with but eventually 3 or 4 hulls with 5 or 6 turret swaps.

I'm taking a slightly different direction post building this....I'm going to carry on slowly doing the Praetorians but I'm actually itching to play with some painted models. Now at the rate and pressure I put myself under to paint these guys perfect, I think platoons of guard in the near future is not likely! So I'm going to work on my planned Allies, use the Guard as Allies then slowly flip back to Guard as I do more. I'll say no more about who the Allies are as I have lots of test work on at the minute but its a take on old classic that's been done before. Hopefully you staunch Guard guys wont mind commenting and continuing to give me much appreciated advice on something else.