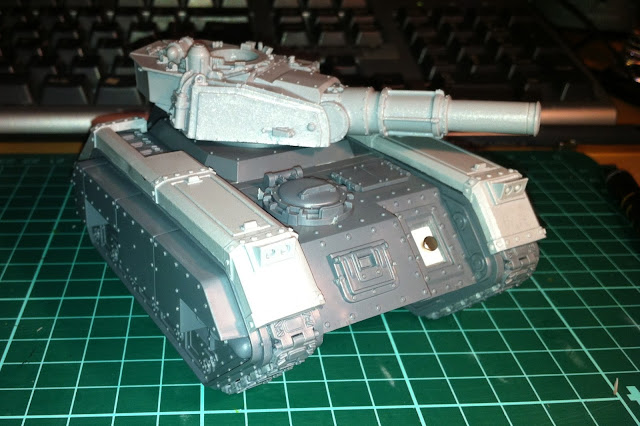 Ok so here is the intended look of my Chimera. The track guards aren't stuck down yet, I finished cleaning up and reshaping them earlier (they really were in an appalling condition straight from FW), neither are the side armour pieces or front hatches.

I love the look but would like opinions on the following before gluing down.

1) What do we think of the chimera round hatch on the front? I love it and think it goes really well but as you can see from my previous post I think I'll struggle to get them to do all three tanks and my chimeras. Do people think a flat square hatch of some description would be better?

2) The track guards I loved when I bought but didn't realise they had the gap till they arrived. I don't like it and I am thinking of filling it over with plasticard. What do others think? It just looks a bit weird and pointless IMO.

3) I'm quite tempted to not have the side panels sticking out but instead cut them flat so they stick directly to the sides, it may look less wide but somehow maybe more tank like?

4) I'm going to add some aerials to the turret but other than that was planning on leaving the front and top pretty uncluttered, unless anyone has some suggestions of what to add?

BTW anyone who enjoys sticking imperial guard tracks on is a sadist! I forgot what a pain in the arse they are! Not to mention the fact they never meet up properly, thank god I'm covering the gap!
Posted by Buffer at 23:40