While my models are far away I realised that I did have this pic on my laptop that I could show everyone before I get back and start painting again. I also wanted to commit, somewhere I could never lose it, the colours I had finally settled on after a lot of trial and error! Thanks to those who gave me their thoughts on the green trousered guy but after a lot of thought I realised I wanted khaki trousers, I just hadn't got the colour khaki the way I wanted it. The guy below is the survivor of more than a dozen test models I started, using combinations of literally every bloody paint in the vague spectrum close to what I was after. 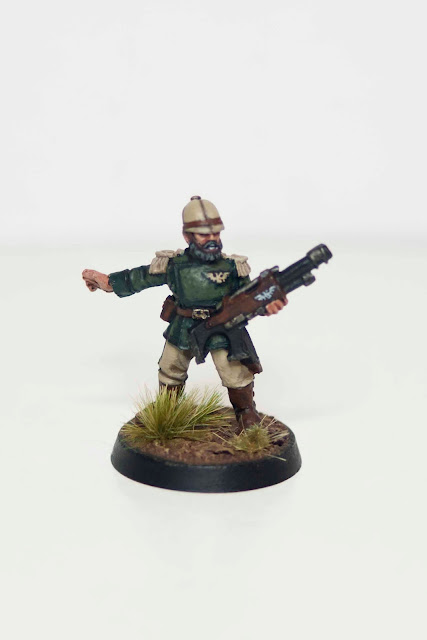 The long grass is Swamp Tuft from Army Painter, the smaller Middenland Tuft. I'll use these two as the main grass throughout the whole army, with some other effects on some models for variety (maybe some of the leaves, new barbed wire etc.). I have tree stumps for 60mm bases.

I'm finally happy, although on the actual guys I think I will add a further highlight to the Khaki of a Karak Stone/White Scar mix, and highlight the metal properly.

Of course if you have any comments I can't actually do any work on them so I am open to any ideas for improvement in the meantime, but as I say, after months of trial and error, I finally love the scheme the way I wanted to when I first suggested it.

I have been away (still technically am) with work for a few weeks now so modelling and 6th has mainly passed me by. I have been working on the background fluff of my Regiment though and will start posting up articles soon, as without my models there's not much else I can do hobby related till I return home. Annoyingly, after finally settling on what I think is the best looking scheme I have the first half painted squad at home, where I'm not, which I'm itching to finish and get some pictures up.

In the mean time having ordered the new rulebook and been busy scouring the blogs the main thing I'm excited about in 6th is bringing some allies to the table. My mainly foot Army I think is going to fare quite well with the HP changes to armour, so I have been thinking of what's missing from my army and what I can get in allies wise to do the job. Not necessarily the best army but one I could write fluff for why they are joined and that I would like to collect and paint. So as with all Guard what's really missing is a good CC option. I don't want to sit back like Wellington at Waterloo and just grind the enemy into submission. I'd like to do that while causing serious thought provoking headaches to the enemy!

Firstly it has to be Space Marines, I don't want a weird Tau or Eldar alliance (not that they fit the criteria above!) I want Astartes inspiring my men. My first and obvious thought was Grey Knights but the sheer expense of the units seems too much to stomach, plus fluff wise, in my mind, the leaders of Praetoria, while loyal to the Emperor, are not adverse to lining their pockets and meeting their own agendas while doing so. Therefore they don't exactly want the inquisition around. So with no to GK, while Blood Angels or Black Templar might be the next on the list for CC SM goodness, I don't have any real love for either. This left me with the two Chapters I do really like, Dark Angels and Space Wolves. Fluff problems, Dark Angels are very secretive, Space Wolves are based the other side of the Galaxy (not that that really matters). I have a small Dark Angels Army remaining that I could work with on the plus side, on the downside I'm not really feeling it as for CC prowess we are looking at Deathwing and Ravenwing both of which I don't really like! Bone armour, black armour and on bikes, yuk!

So I'm now looking at a small Space Wolves Ally Army. While not the greatest SM CC force they are still good, plus with the world the 13th are based on being wolf infested, I get a good fluff tie in and can also tie models across the army with Wolf related items. I had already planned on the two CCS bodyguards being wolves! I'm planning on adding a single Grey Hunter Pack, a Character (probably Canis Wolfborn) and Thunderwolf cavalry, maybe Wolf Guard in the future for terminator CC goodness.

I'm quite excited by this, while the Praetorians are still my first labour of love, the thought of painting 100s of green jackets without rest was filling me with dread. A little bit of Space Wolf modelling in-between will help break stuff up. I'd be interested if others have similar plans for allies and what they intend to take? While every 40k Army has a flaw, with allies it probably means you can create an army that is good at all elements, but maybe not as good as the one you are facing!
Posted by Buffer at 00:37 1 comment: