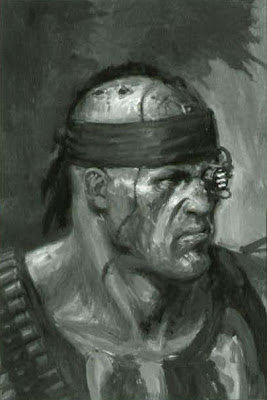 I don't really comment on the rules much as I am more of a part time hobbyist and only play the occasional game for fun, but I found the latest FAQ mildly interesting.

The only real change of note I could tell is Camo Cloaks changing from conferring stealth to adding +1 to cover saves. While there is therefore no difference to a unit that can take cloaks in general (Stealth conferred +1 anyway) , it does add a +1 bump on top of Stealth and therefore make Harker a more potent option.

So his squad now gets +5 save if not in cover but with Forest a +3 and anything better +2, if they take infiltrators and therefore camo cloaks.

So by my reckoning you could for example get a unit with a heavy bolter, three melta guns, and a lascannon, that with infiltrate can set up after your opponent has deployed and will have huge amount of firepower and pretty much a minimum of a 3+ save. Ok thats a lot of points but deadly and difficult to shift I would imagine.

A slightly different suggestion would be three plasma guns and a lascannon at a whopping 220 points but able to sit in forest or even better a building to take out light vehicles/terminators/meq at range while happily hiding behind a 2 or 3+ save.

As I say I'm not a big gamer, but when I do I like to use the special characters for a bit of more interesting take on the Guard tactics and this seems a bit more of a bonus than a simple +1 might otherwise seem. However I may be totally wrong and I'm interested in what the hardcore gamers think as at the end of the day you're still paying 30pts for a +1 cover save. But if you run Harker with some camo cloaked brethren (which I have seen on a few blogs) you might be happy. Or you might think a demo charge is worth more than a +1 to your saves for the same points?
Posted by Buffer at 19:45