I started this blog not only to help me and to get advice from others, but also hopefully to help those who, like I did, have no idea about how to go about collecting Praetorians since Games Workshop pulled the plug. Now there are some good thoughts on alternatives to GW on other blogs (Particularly Col Gravis' http://colgravis.blogspot.com/2009/05/praetorian-imperial-guard-alternatives.html) but I hadn't seen this head swap in particular looked at in detail. So to help people who may be considering the same purchases as me, I thought I would post this up.

I got a pack of the Empress Miniatures British Zulu War heads to try out (this is the 10 head pack with two un-helmeted heads). I have Victoria Lamb's pith heads but as there are only 6 different ones of them, I thought I would look about for some variety. I haven't seen the Secret Weapon pith heads so I can't comment on those.

As you can see from the picture above, the EM heads are noticeably smaller, in my opinion, to the original GW heads. It is also my opinion that the difference is too great to use on either GW plastic Imperial Guard (Cadians for instance) or on the parts available from third parties, such as from VL. The heads themselves look fine but, again in my opinion, the sculpts are not up to the quality of either the original GW Praetorians or the VL pith heads. The VL heads are a great sculpt, and arguably nicer than the originals, while being of an almost exact match in head size with them (Although note the piths are bigger and a differing style). In fact without sounding like a VL fanboy (honestly I didn't even know who she was till last November!) her heads are amazing quality and well worth the price and delivery from Australia.

Its not all bad news though, below is a picture of the Empress Miniatures British equipment available for £4. These are brilliant and will look great adding character to bases or anything else you could think of for them. 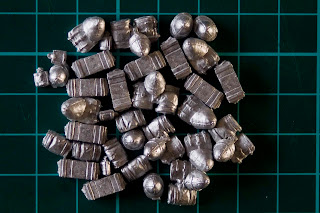 Both the heads and accessories can be purchased from Empress Miniatures (I have stuck the address below) and are found in their Anglo Zulu War/Terrain and Accessories section. There is also a cool looking resin tent in that section.

I must stress I have seen no other products from Empress and some of the models look like they would make cool additions to a force. They also have some very reasonably priced terrain pieces with walls and buildings in their Buildings and Accessories section. I am purely offering my opinion on the suitability of their heads to use on a converted model.

In my opinion if you need Pith Heads you absolutely cannot go wrong with the ones available from Victoria Lamb here:

I have also found delivery to be surprisingly quick from Australia (Less than 10 days).

Or alternatively, based on others opinions, look up the Secret Weapon pith head swaps.
Posted by Buffer at 15:50