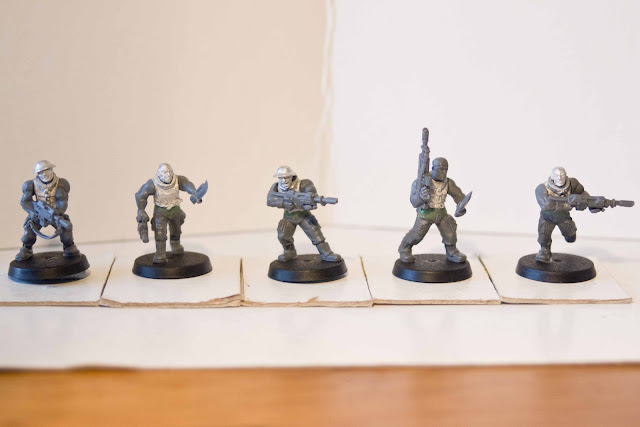 So here are the first 5 penal legion troops of my planned two squads. They are just catachan parts with Victoria Lambs penal legion torsos. They will all have bald heads but I thought the bandanna, plus the brodie helmets added a bit of character.
It has taken a lot longer than I had hoped to get these together as just haven't had any time, and they also needed a bit of tlc to get the parts together looking right (needed to shave off all the catachan belts for a start!). Still need to fill in some gaps with green stuff then going to add just a knife (or an empty sheath for those holding them) as don't want too much going on.

Now I really need some advice on colour scheme as I said in a previous post. At the minute I am planning a few different colours of uniforms but with the dark red being a theme throughout (either berets, cuffs, stripes, collars etc. on those troops who don't have red jackets like the main bulk).

What do I do with these guys??? I don't want to put them in red prison overalls as I'm not sure it would work and definitely not american orange prison overalls. Was thinking either grey, black or desert colour (like I am planning for tanks/heavy weapons) but not sure if they will look slightly disjointed because of this, or whether it will even matter? The advice of those much more experienced than me at collecting a guard army (everybody!) would be greatly appreciated.
Posted by Buffer at 14:31