So it has been, ouch, over a month since I have posted anything and I'm afraid I haven't done much. Many reasons, work has been insanely busy (were less than 33% manned!) and this has led to me getting home late and missing out on my post work, pre wife getting home, model slot for the last few weeks. Secondly the aforementioned wife finally had enough of me being sprawled out across the dining room and I got kicked out. This means I now have a spare room for all my hobbies out of the view of any guests! But first it needed tidying and then buying some flat pack furniture to work and store stuff on. Thirdly, and this is entirely my fault, my other hobby(?) of PC gaming called me back over Easter and I found my self travelling back to Skyrim and punching people to death as a giant cat!

But the major issue, and this wasn't my fault, was the change to the citadel paints in which I must have been the only person remotely interested in GW models who didn't know about this. So after spending literally months settling on a colour scheme I had a little toys out of pram moment when I found out and called a halt to all painting (and as it turned out modelling as well). In hindsight I'm glad they changed just as I was starting out on a mass army paint, but it still irked with all the money I had invested in the last generation of paint. Now most of this wont matter, white is still white, black is still black, metal is still metal and many of the other paints I will use so little of anyway I'm not bothered. What I was bothered about though was making sure the main colours of my scheme remained the same. So I ordered greens, browns and creams (plus a few others) from the new range and settled back to await their arrival. 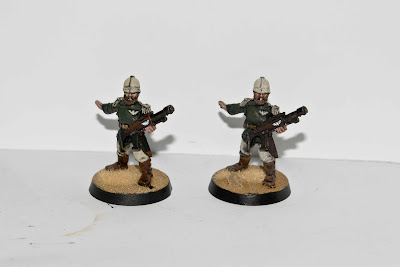 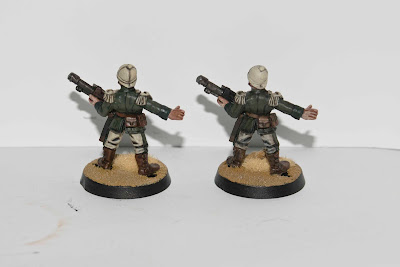 Just finished repainting up a test guy and in some ways I'm glad I waited. The new paints are on the left in both photos the right is my previous settled colour scheme. Now the greens are actually incredibly similar, Orkhide which was the base is a dead ringer for Caliban so know issues there (so for anyone wondering it therefore doesn't look anything like the previous dark angels green, apart from being dark green I suppose), the Castellan green was slightly lighter than the old Catachan but next to each other you can't tell much difference. All good so far, Karak stone (still thin but not as bad as the old Khaki) was covered by Ushabti which looks pretty much like bleached bone for trousers and pith. My only real issue has been the leather. Mournfang looks nothing like Calthan brown (again apart from also being brown), cheers for the comparison chart GW. But as much as I liked the old boots, they were so easy to do and I think looked really good, the effect you do get with Mournfang is a bit more like spit and polished brown leather, so I cancelled the panic order of 6 pots of Calthan while they are still available and I'm going to persevere with the new paint. Finally Balor brown replaced Tausept Ochre on the bases and its not quite the same, little less orangey, but I actually prefer the new look to the bases while at the same time they look close enough to the old that you wouldn't really notice.

So with a reinvigorating of enthusiasm I should hopefully have some models done for everyone to see soon. It will take me a while as spare time is in short supply but at least now I'm finally settled with what I'm doing and can just crack on.