I can't believe how long it has been since I last posted. I just haven't been or felt like hobbying recently, the hobby room has been barely used due to work and a general lack of free time. I have still been loitering on Blogger and have enjoyed seeing others new work, now I have got a second wind and have restarted a number of projects. Painting of standard Praetorians is ongoing and I'm hoping to have the first squad finished and photographed soon. Last bit of my jigsaw with them was finishing the base scheme, rather than a woodland scheme I realised it was more a pine forest I was after and the picture below shows roughly what I'm aiming at. 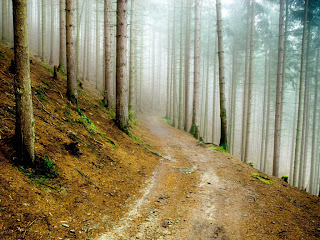 Painting the base is pretty easy now and I'm really happy with what the base looks like before any foliage or extras are added. The one thing I haven't got quite right on this test is the log which I should have put more grey on, I was too light with the first dry brush and too much brown is still showing through. With the resin tree stumps I have though I shouldn't see this as a problem as they have much more defined recesses to dry brush. 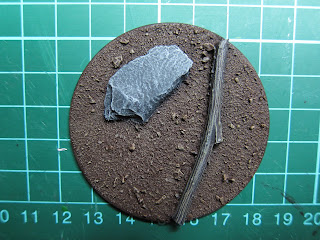 So I think it looks pretty good before any foliage is added or flocks. I literally have a draw full of different static grasses, flocks, leaves, moss etc. You name it, I have probably bought it in the pursuit of the perfect base scheme. With a break away from it all though, I have sat down tonight and pulled out a few bits and bobs which I think added to this base really give off the theme I'm trying to achieve, while importantly to me, allowing the base colour scheme I like so much to still be prevalent. 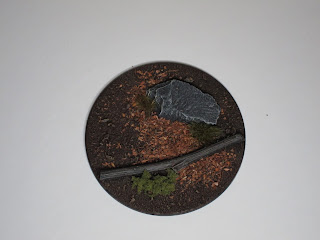 And here it is. Simple but I think effective at portraying a sort of pine forest base so the army has that woodland feel without the need for masses of grass. I stuck a guy on to see how the colour scheme fits and its made me pretty happy that this will look good on a large scale. 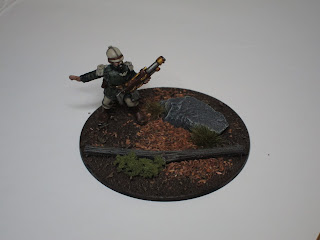 So now back to painting, it wont be quick I'm afraid, Commissar Dave's most recent posts got me determined to get back in to hobbying and to do the conversions I had been planning. Converting is my favourite bit by far, painting I find a chore so I'm breaking up layers by finishing off my five Ratlings as well. Thanks for still following, new stuff should be much quicker coming now as I have a lot of love for hobbying again (and a weekend with the Mrs away!).