First Men of the Regiment reporting for Duty - Finally!

Do you know I promised myself I wouldn't post any photos till I had a full squad, then it was until they were totally finished. But now I know I'm going to have to wait 24hrs between varnish coats before putting on grass/moss, I couldn't resist showing the guys I have just finished painting. 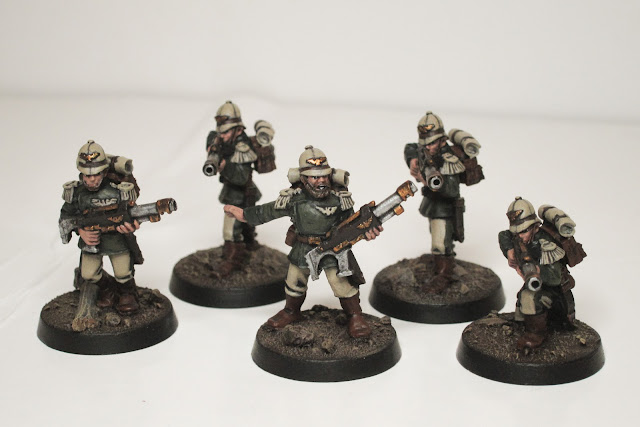 The slight delay in getting some fully done was waiting for the arrival of forge world backpacks the keen eyed among you will notice my light troops are now sporting! You know when you have one of those, I wonder if I.... thoughts, that your wallet instantly regrets when you realise, actually that looks kickass! This was my biggest one! They are also sporting brass eagle cap badges as I realised sculpting green stuff isn't really my thing, and gluing on these, while fiddly, is still a lot easier than creating them.

I know they shouldn't really have eyes but I'm using these guys to practice before I dare paint any characters! The rest of the first two squads are in various stages of either half painted, awaiting helmet badges/backpacks or just needing undercoating. So I will soldier on and hopefully have at least this squad done by the end of the month! I'm keen to get the now completed converted Praetorian Ratling Snipers (here as I think most people missed them) also painted soon, as I really like them and it breaks up painting standard troopers. Some resin forest bases also arrived the other day and those guys are gong to be the first of my army I try out on them.

So after, wow, almost a year since I first contemplated a Praetorian army it feels great to show you the first, of I hope many, of my finished troops. And I'm thinking the 13th Royal Praetorian Rifles, yep, that has a nice ring to it.

Cheers to all for continuing to stop by, comments, constructive criticism and other help always welcome!