Right so I have actually done some modelling and nearly have 1st Platoon ready in full to be undercoated and painted. I have decided that I need to be a bit more organised and now with far less space to work in (and the fact I'm waiting for undercoat anyway) I have decided to get 2 squads and a PCS for first platoon fully ready for painting before I then switch into painting mode. I know it is very much a part time hobby for me and I'm never going to be kicking out a squad over a weekend but I want to actually kick on now I know what I want to do and get some models ready to game. So as I say modest task of getting 25 Models ready to paint (well 26 as I think I will have plenty of time to strip and prep a powerfisted Commissar to aid the PCS). I have given myself to the end of the month to achieve this as I need to start setting myself some headmarks to motivate me to get things done. I am away next week in Rome though, lucky me! so hence the longish timescale.

So as it stands at the minute I have 9 Lasgunned troops undercoated/part painted.

Below is what I have just finished off tonight, one of two Missile teams, a grenade launcher, 2 more troopers and a sergeant, just need basing. So 1 more trooper, grenade launcher, sergeant and the other missile team to do for the two squads and these are already part cleaned up. And then also the PCS, which I have made a start on below. 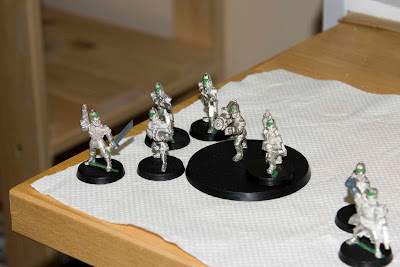 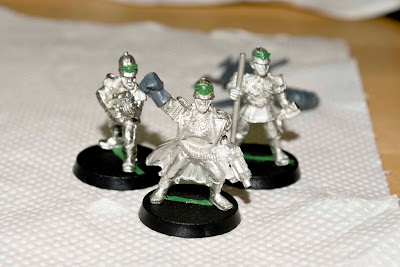 Somewhere on someones blog, sorry can't remember whose otherwise I'd thank you for the idea! I saw the original Lt model converted with a powerfist, so I decided to do the same. The Catachan command squad powerfist seemed a good fit and 5 minutes later with a bit of sawing, drilling tidying up and pinning I have this guy.I was amazed how easy it was and I'm really happy with how he looks. I was going to green stuff around the fist but actually I think it looks quite natural as it is now.

The guys in the background are two of the other members part finished. One is the standard bearer (who I need a smaller drill bit and pins to do my standard conversion but should hopefully arrive soon), the other is the first of three Flamer conversions I'm doing and once the green stuff dries I should hopefully be able to complete him tomorrow. I'm doing three different conversions for the command squad so it will have three differing flamer models to make up the 5 and having great fun with those three. I love converting them even slightly, along with my mould line removal fascination that's probably what's taking me soo long! Every guy will have a helmet badge which I do take a bit of time over and I also drill out all barrels for a bit of depth to the look of it, all the chainswords are getting replaced as well and then I'm converting special weapons.
Posted by Buffer at 22:55