Woodland Base for the 13th 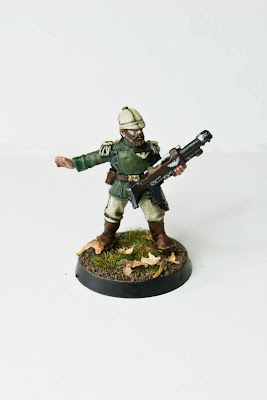 I'm still working on the three Flamer conversions but they should be completed soon and the whole of First Platoon (well the first two line squads and PCS!) is easily going to be ready to paint by the end of the month, in which case I think I will do the last two ratling conversions as well before starting painting.

In the mean time having thought a lot about the back story of the 13th and why they wear green, I decided to change bases to a woodland theme as previously stated in another post. Here's a rough draft of what they will look like (I ordered the wrong leaves though! more Autumnal coloured ones are on the way!). I have also ordered some tree stumps in resin for the bigger bases and will be adding slate to some of the bigger ones as well for a bit of contrast. Anybody know how to do moss? I'm thinking some dark green weathering powders.

While I don't think the effect pops as much as the desert, I think it is rather striking overall and I'm really happy with it. It took a few attempts with different browns to get right and I think the overall look of the models will be great and a bit different when they are done. (the green of the jacket on this guy is a bit light as I was playing around with some lighter green highlights which went horribly wrong! on returning him to castellan on top he now looks a bit brighter!)

While I was on holiday I thought a lot in the evenings about the background of the Regiment and their adopted colony world and will post up some writings soon. Anyway that green stuffs not going to sculpt itself so off to finish the flamers. Thanks for stopping by, would appreciate others thoughts on the new look.
Posted by Buffer at 14:56